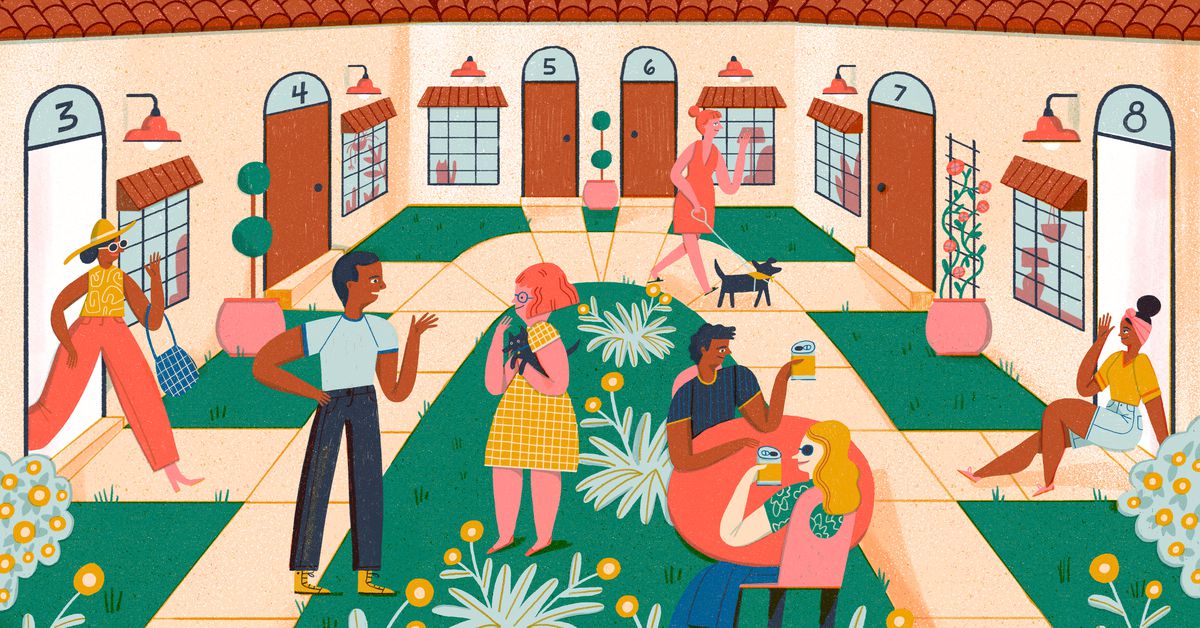 Hollywood producer and writer Alison Bennett was intent on starting over when she moved into a 1920s bungalow court in the Los Angeles neighborhood of Silver Lake. At first, she was enamored with her floor-to-ceiling windows and clear view of the “Hollywood” sign, but she quickly learned that the true draw of the court was its residents.

“Most of the people living in the bungalow court were insanely good-looking couples in their late 20s,” Bennett recalls. Her tight-knit neighbors would hang out in the party-light-strung parking lot of the Spanish Revival–style court at all hours of the day and night. “It was like a sitcom … I was only a few years older than them, but I felt like the resident divorcée crone. It was like being stuck in Friends when you didn’t want to be in Friends. I loved every second of it. My girlfriends would come over and see all the hot people walking around and be like, ‘What is your life?’”

Today, roughly only 350 bungalow courts survive in L.A., but the sense of community and camaraderie among residents has made them one of the city’s most beloved and desirable styles of housing—one that some argue should be revived as a solution to L.A.’s shortage of affordable housing.

The communal experience was exactly what Kathleen McInnis was looking for when she moved into an early-20th-century bungalow court, surrounded by greenery and across from Paramount Studios, in 2004. (Some of them are thought to have once been cottages for contract writers at the studio.) She’s been there ever since. “Most of us have been here for a long time—we all know each other, and most of us do things together,” she says. “It definitely feels like family here: We watch out for each other; take in mail and water plants when others are away; have shared holidays, cocktail hours, and an open-door policy for each other.”

“It was like a sitcom … I was only a few years older than them, but I felt like the resident divorcée crone. It was like being stuck in Friends when you didn’t want to be in Friends. I loved every second of it.”

The bungalow court—tiny private homes sharing a common yard and amenities—evolved on two separate tracks in the early-20th century, according to housing-policy expert Mark Vallianatos. In working-class neighborhoods in South and East Los Angeles, courts were a way to house several families on one plot of land without incurring the high cost of constructing an apartment building. These neighborhoods were often crowded owing to racially restrictive covenants that forced minorities into certain neighborhoods, but bungalow courts offered both privacy and fresh air.

According to historian and urban designer Todd Gish, in 1908, the city unveiled a new government-funded court on Navarro Street in the East L.A. neighborhood of El Sereno—one of the first model courts that was not considered “slum” housing. Featuring 18 two-room lodgings, shared latrines, and a common public space, each tiny home was rented to families, predominantly people of color, at $5 a month. Similar courts, both privately and publicly funded, soon sprang up in working- and middle-class neighborhoods across Los Angeles, and a few from the 1920s still survive on 81st and 82nd Streets in South Los Angeles.

More well known are the early tourist courts of nearby Pasadena—an upscale seasonal resort that brought wealthy Edwardian Midwesterners to Southern California in droves. Perhaps borrowing from the idea of the summer cabin, the presumed first Pasadena bungalow court was commissioned by developer Frank G. Hogan in 1909. Named St. Francis Court, and designed by architect Sylvanus Marston, the development boasted 11 small Arts and Crafts–style mini-bungalows, each with its own front yard.

Soon bungalow courts, many of them rentals for seasonal tourists, were springing up all over Pasadena. This proliferation (around 100 bungalow courts still survive in the City of Pasadena) coincided with popular Arts and Crafts and Revival movements, and the courts followed suit. Bungalows—usually one- to three-bedroom units—were built in architectural styles embraced and refined by SoCal architects, ranging from Mediterranean to Swiss chalet to mock English Tudor to Spanish Revival.

Major architects even got in on the act. Bowen Court, one of the most charming courts still standing in Pasadena, was designed in 1911 by Arts and Crafts dynamos Alfred and Arthur Heineman.

As the population of the Los Angeles area boomed during the 1910s and ’20s, thousands of bungalow courts were built to house newcomers to California. The courts were often placed close to streetcar stops and business districts with working- and middle-class residents in mind. “It was a very lucrative building type,” says Sue N. Mossman, executive director of Pasadena Heritage. “If you had a single lot, or two lots, in a residential area, rather than building one house or two houses, you could actually build six housing units or ten housing units and either rent them or sell them … It was really a pretty good business proposition.”

So lucrative and practical was the style bungalow courts were soon being adopted everywhere from Phoenix to Des Moines. “The idea of having your own private home was very much part of the American experience—the American Dream—in the early 1900s, and the bungalow court gave you that,” Mossman says. “And yet you could walk outside and have a bigger garden, a bigger open space, and a shared neighborhood feeling instantaneously.”

“Living here has given me the sense of security I believe one might have when living in a small town.”

By 1924, the communal experience of living in a bungalow court was so pervasive that the Los Angeles Times printed a poem about it:

Did you ever live in a bungalow court, and have neighbors a plenty, of every sort? With each little cot filled to its doors, so that some of them surely most sleep on the floors. Some from the north and some from the south. Such a lot all so different and yet so alike, doing their best their landlord to fight ...

Some find life easy in this land of the sun and take things as they find them, and have lots of fun. There is a phonography playing in each little cot, and on Sunday mornings of noise there’s a lot. The motors buzz in and the motors buzz out. Everyone going a different route.

The bungalow court would become emblematic of the Southern California lifestyle. “You often see bungalow courts depicted in classic movies,” says Hollywood tour guide and bungalow-court resident Karie Bible. “They feel very Southern California and often tend to be the homes of working-class characters (Joan Crawford in Autumn Leaves), show people (The Day of the Locust), criminals (He Walked by Night), or suspicious characters like Ida Sessions in Chinatown.”

But the city would unintentionally ban the style in 1934. That year, Los Angeles made one parking spot per unit a requirement in all new residential buildings, according to Vallianatos. The city also passed an ordinance requiring a front, side, and back yard for every new residence. “Those two things together basically eliminate them, without I think anyone wanting to, which is really sort of the tragedy and the irony,” Vallianatos says.

“It combines the best of private and public, because you have your own unit, and then you have a small amount of semi-private outdoor space, like a stoop,” Vallianatos says. “But then there’s also the public shared space in the interior courtyard, which provides the option of a green space to people who either can’t afford to purchase a place that has that, or they don’t want to do the maintenance, and now the maintenance is being taken care of collectively by some gardening company or something. You can also talk to your neighbors when you want to and go inside when you want to.”

In 1980, a young Pamela Perrine moved into a dilapidated bungalow court in West Hollywood. “When you’re young, you want to be around young people and feel safe. Bungalows courts were affordable back in the day, so you almost always had young people renting them,” she says. “We all became very close.”

Perrine remembers a community filled with Sunday barbecues, lawn concerts, and the occasional bad mushroom trip. Her neighbors were a collection of L.A. tropes—an up-and-coming photographer, a kind old man, a waitress-actress. She remembers one handsome neighbor named Rick whose “bungalow was filled with books, books everywhere from floor to ceiling. He would knock on my door and ask me to help him tear the sleeves off his tee shirts to make them into muscle shirts.”

As rents and mortgages have become astronomical in Los Angeles, and old housing has been torn down, bungalow-court units have become increasingly scarce and coveted. “It was soon made clear that most people who lived here had been here for a long period of time and I was lucky that my place had opened up,” says freelance art-department coordinator Rosy Nolan, who moved into a one-bedroom bungalow in Silver Lake in 2013.

Over the past few years, housing-policy experts, including Vallianatos, have argued that bungalow courts should be built again—an affordable, quality solution for L.A’.s chronic housing shortage. “It’s a good win-win in terms of addressing the housing crisis,” he says.

The space and community of the bungalow court has made staying at home during COVID-19 easier for many residents. “We can still talk to each other, sit on our porches across from each other, and share with each other every day,” McInnis says. “It’s easy to stay six feet away, and we all wear masks anyway. But it’s just nice to know someone is right there and could help if needed.”

Nolan agrees. “Living here has given me the sense of security I believe one might have when living in a small town. We respect each other’s privacy but maintain a comforting sense of connection,” she says. This has made her feel safe, with neighbors checking up on her much more frequently than if she lived in a traditional apartment. Bible asked her landlord for permission to garden outside her home as a way to cope with the pandemic. “My tiny porch must look like a Rose Bowl parade float at this point.”

Gardens and gatherings, relatively affordable rent, and the combination of private spaces and college-dorm closeness are rarities in the anonymous city. Alison Bennett, now remarried with two children and a house in Eagle Rock, still harbors dreams of one day overseeing the drama at her very own court. “All I want to do is someday buy a bungalow court, restore it, and fill it with hot people, divorcees, and small dogs.”