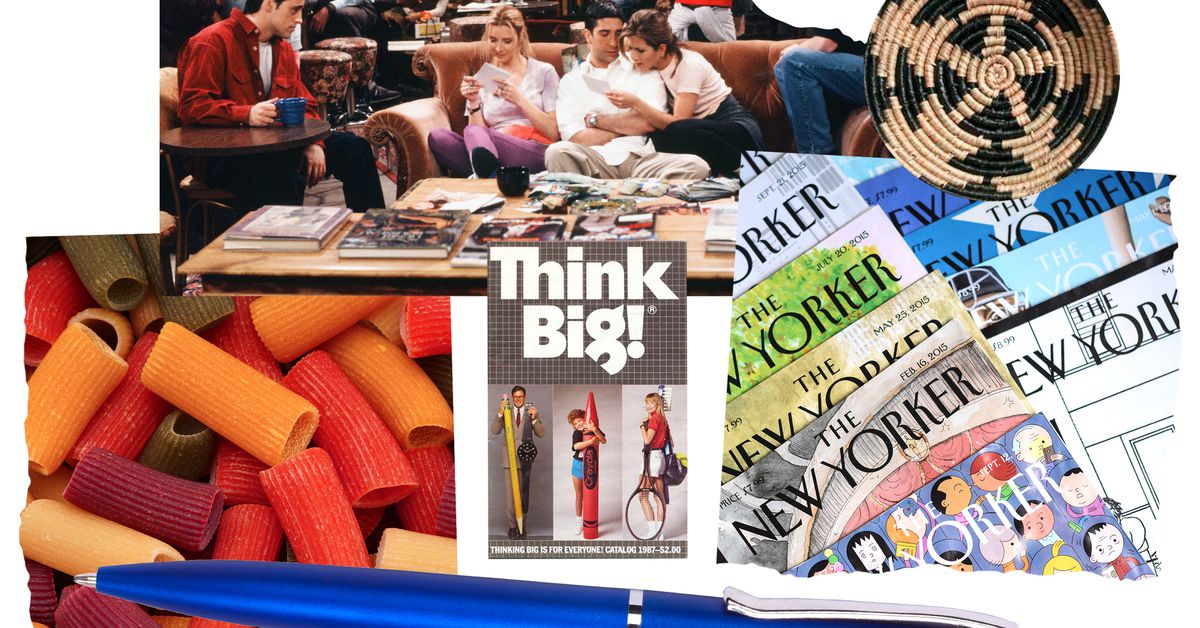 This past weekend on Instagram, supermodel Gigi Hadid shared a few photos with her 55.3 million followers of the New York City home she’s spent the last year decorating.

“Of course it all came together right before quarantining out of the city,” she wrote in the caption, “but I’m excited for the time I’ll get to spend enjoying all the special corners that were made with a lil help from some of my favorite creatives who embraced my ideas and didn’t call me crazy.”

She seemed to get the memo that maximalism is in, with its mix of colors, textures, and DIY-ish touches that compete uncomfortably. It’s a luxury-basic Manhattan condo that wants to be a funky Venice Beach surf shack. Or ski chalet? She has her skis on display too. And lots of streaky white marble I suspect came with the place. It’s the cost-is-no-object home of a 25-year-old model who wants her coffee in a statement mug, just like every other 25-year-old on Instagram. And her décor choices seem to be steeped in nostalgia for the 1990s, the decade in which she was born.

In that sense, it is admirably authentic. She could have imposed the prepackaged good taste that, say, Gordon Kahn, the interior designer she gave a special thanks to, seems to specialize in. But she chose to fill her house with things that she genuinely seems to enjoy, even if they don’t quite … add up exactly.

Some of her fans have praised her design choices. “OMG it turned out so great, G! It’s beautiful,” commented Tan France, a host of Queer Eye. But as internet trolling has become a blood sport, not everyone thought so highly of it: Insults have also flooded in. Given that she’s had to do a lot of apologizing over the years — for racist posts and appearing in blackface on a Vogue Italia cover — her apartment is the least cringeworthy element of her public persona. And the most human.

Below, an annotation of the apartment’s influences:

Hadid was born in 1995, a year after Friends began its ten-season run on television. While she may have been too young to watch the show when it aired, the reruns on streaming services have proven to be extremely popular for her age group. Could her home reflect an obsession with the decade of her birth? Signs point to yes. Her sofa — which appears to be the Mah Jong from Roche Bobois, complete with Missoni upholstery — looks like the high-end version of Central Perk’s burnt-orange, tufted-velvet couch. The damask runner and Chevy tailgate in her hallway also feel like the types of found-style accoutrements a bootstrapping café owner might hang on their walls.

Founded by a San Francisco importer in the late 1950s, Cost Plus made a name for itself by selling products from all around the world at low prices. The “World Market” branding was part of the retailer’s decision to go public in 1996 and expand across the country. To this day, you can find rattan furniture from Southeast Asia, cast-iron cookware from Europe, and baskets from Africa. The baskets hanging over her bed, chrome countertop appliances, and hamsa on her coffee table speak to this “global” sensibility.

New Yorker covers as bathroom wallpaper is a favorite DIY project, and it seems like Hadid found a few pins on Pinterest to guide this decision. Weirdly, Warren Buffett had the same idea.

For a time — well, 1974 to 1994 to be exact — Think Big! had quite the cult following. The retail franchise and mail-order business sold comically large versions of everyday objects, like six-foot-tall pencils and crayons. It also provided props for the 1988 movie Big. Hadid’s enormous ballpoint pen speaks to this era of products — and maybe even to the feeling of a carefree kid trapped in a responsible grown-up’s body. Today, you can find similar things at Great Big Stuff.