How do you move in with a complete stranger right now?

How do you move in with a complete stranger right now? 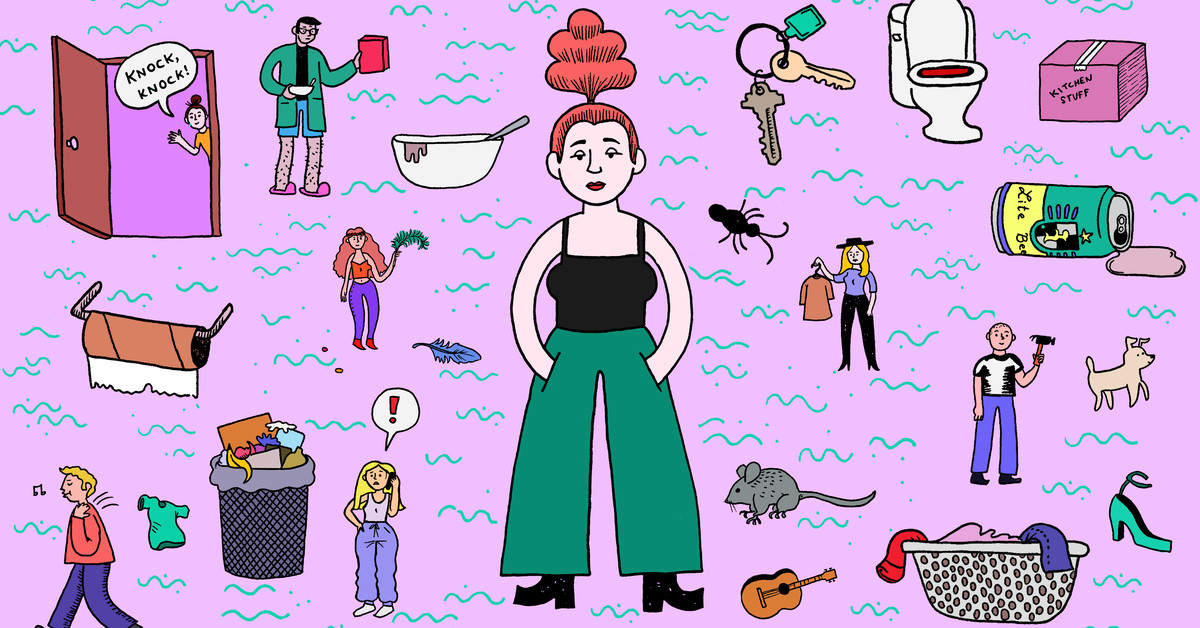 Sarah, 33, had just moved into a four-bedroom house in Portland, Oregon, in February when the pandemic became a serious concern. “The roommate who was on the lease got laid off in March and immediately took off,” says Sarah, who asked that her last name not be used for privacy reasons. Sarah took over the lease and began the process of finding a roommate for herself and the two other people who still lived there. “I’ve looked for roommates before and usually things are frantic—you get so many responses.” In March, Sarah only got one “viable response” from a woman who, luckily, turned out to be a good fit. Soon afterward, another roommate whose income was impacted by COVID-19 decided to move to a yurt with her partner.

There’s always a certain amount of risk involved in inviting a stranger to live with you. But never has that risk been clearer than in the last six months, as people in many states are under stay-at-home orders to flatten the curve. If a potential roommate is lucky enough to have a job (as of late April, there have been over 30 million unemployment claims in the United States), they’re either working outside of the house, which means potentially bringing COVID-19 home with them, or home all the time—both of which make the prospect of sharing a space more fraught than usual. Now in addition to worrying about a new roommate’s quirks and cleaning habits (or lack thereof), people are concerned about the microscopic germs tagging along inside people’s bodies like an unpredictable plus-one.

Sarah says that she and the housemate who hasn’t moved “absolutely rely on having four people to pay rent” in their house, though she’s wondered whether it would be better to pay extra money to avoid “having an additional vector in the house,” she says. Each room is $700 a month. “You don’t want to add someone who hasn’t been socially distancing.”

“No living situation can be ideal, but if I’m sheltering in place, I don’t want to shelter in place with some weirdos,” says Rebecca Baldwin, 38, who has been looking for roommates for her Bushwick, Brooklyn, loft since early March. She’s posted on Craigslist, Listings Project, various Facebook housing groups, and any other site she can think of but has only gotten one taker—for the cheapest and smallest room ($900) in the four-bedroom loft. “At one point, I even posted a ‘I have free housing for health care workers’ link because I figured if I’m going to go down, I might do something good,” but that didn’t work out either. (She got two inquiries; one found alternate lodging and the other never responded.)

“I had my pick before this,” Baldwin says. “Even though the price is super dumb expensive, people would still rent it. I’m in a good location.” Baldwin often rented the larger room short-term through Airbnb, and she had roommates for the other two rooms until one tenant moved in with friends in February and another was laid off in late March and moved back in with her family. Baldwin is lucky enough to have a stable job, but didn’t pay rent in April because she couldn’t pay even close to the full amount, $4,800 a month, by herself. (When she signed the three-year lease, it came with three months free.) She’s been in contact with her landlord about her situation. Their only response was to ask her what she would be able to pay by herself. “But I don’t know what that means and I’m afraid to ask,” she says. “Do I have to pay after? Would it be better for me to pay the full amount now and nothing in May?” Thinking of the worst-case scenario, she says, “In some ways it’s nice to know that evictions take a long time.”

Roughly 79 million adults live in a shared household, according to a 2017 Pew Research survey. As the cost of housing rises, sharing a home is the only way many people can afford to live in cities like New York or San Francisco. But in the midst of a pandemic, fewer people are looking for rooms. “Rooms are still there from last month and we’ve seen rents come down as well,” says Matt Hutchinson, communications director for Spare Room, which works with individuals and businesses to fill, well, spare rooms. “In a city like New York, there are a lot of people who work in both hospitality and entertainment, and both those industries were hard hit. Now all their sources of income have dried up,” Hutchinson says. Many people remaining in their apartments are relying on unemployment checks to pay rent, while others have moved to family homes or to cheaper living situations.

“There are a lot of rooms for sublet because so many people are out of town because of COVID-19,” says Stephanie Diamond, founder of Listings Project, a weekly newsletter where individuals post housing or art studio rental opportunities (no brokers or apartment managers allowed). “Finding a roommate right now is slower and more difficult than April or March of last year.” Diamond, who vets every housing post before sending out her newsletter, has noticed odd changes to housing descriptions since the pandemic began. “Yesterday there was one described as ‘the neighborhood has very few people walking around.’ That’s definitely not something I’ve seen before.” There are a lot more mentions of housing being “near a grocery store that will deliver” instead of bars, restaurants, or even public transportation.

Rather than holding in-person open houses, many people with rooms to let are screening potential roommates, and showing their spaces, virtually. In other cases, people are allowing for limited in-person tours provided potential roommates don protective equipment ahead of time. “I bought a box of sanitized rags and asked anyone who toured the apartment to sanitize their hands before they come in,” says Lucian Novosel, who lived in San Francisco until recently. He took charge of the roommate search to speed up his own move to his parents’ home across the bay in Berkeley. “I just wanted to move back in with them, work on the camper van in the garage, and move on with my life that way,” Novosel says. He added, “Paying for gas on the road is easier than paying for rent.” Even though his room in the four-bedroom, two-bath apartment was on the small side—just enough room for a bed, desk, and closet—it was easy to find takers. The place has a backyard and washer and dryer. It’s also only $800 a month, rent-controlled, with easy access to a nearby BART station. His roommates quickly found someone they liked and Novosel moved out before rent was due on May 1.

Finding a replacement has been much more difficult for Kathryn Foley, 24, a senior who lives in off-campus housing near Temple University in Philadelphia. While the school recommends off-campus housing locations, the student apartments aren’t connected to the school. Foley’s is run by American Campus Communities (ACC), a publicly traded investment trust with over $7 billion in assets. She says her landlord won’t let her break her lease, which ends on August 1, without penalty, as per its policy for all its student-tenants, though ACC does give tenants the option to apply for a Resident Hardship Program for those who have lost income due to COVID-19. (ACC did not respond to requests for comment for this story.) Foley has to find a subletter if she doesn’t want to continue paying $769 a month in rent after moving back home with her parents.

“A lot of the people I’ve talked to haven’t even tried to sublet,” Foley says. After the university encouraged all on- and off-campus students to return home if possible, Foley’s roommate, who pays rent directly to ACC, moved out right away and is presumably planning to continue paying despite not living there. Foley may wind up doing the same despite spending hours looking for a subletter. She notes that most people willing to take over the lease in the summer are coming for internships or temporary jobs—all things that may not happen this year. “I’ll have to pay the rent if it comes down to it,” she says. “It’ll affect my credit in the future if I don’t.”

Jason, 36, from Portland, Oregon, was able to find housemates to fill the four-bedroom home they purchased in early March but has found that the logistics of having a roommate are different during quarantine. They had a house meeting to discuss whether any of them had pre-existing conditions that might put them in a high-risk category for COVID-19 (they did not) and as a group decided it was okay for the two people with romantic partners to keep visiting each other. “We’re involved in aspects of each other’s lives that usually would seem like not our business,” Jason says. The household has also discussed things like going to the grocery store and whether they could have more group meals and shop less. “It takes a while and a lot of communication to find a system that works for everyone. We’re trying to do the responsible thing,” Jason says, noting that quarantine is hard enough on everyone’s mental health without forcing people to stay away from their romantic partners.

Sarah, too, says she ordinarily would never ask a potential roommate about their social life—do they have a partner they intend on visiting, how do they feel about handwashing, are they taking social distancing seriously?—but feels that she has to. “I’m definitely asking more about schedules and stuff because everyone’s working from home. It’s a big house but I still want to get a feel for everyone’s vibe,” Sarah says. “I think how I worded it was, ‘How are you dealing with all of this?’ and seeing what they say.”

Baldwin, who expressed frustration about Airbnb’s cancellation policies and lack of guidance to hosts in the early days of the pandemic, as well as the $180 total in fees she’s paid to Listings Project to list her apartment for rent over and over again, wishes renters were getting more support generally. “I thought something would happen. I started tagging [buildings] at night, ‘Rent Freeze Now,’” she says. She’s considered abandoning the roommate search and leaving her apartment entirely, possibly moving closer to her partner, who lives in California. “But I’m not in a position—and I’m glad I’m not in a position—to just abandon a space.” When the pandemic-caused exodus from New York started, Baldwin saw young people in lofts across the street moving out, leaving mountains of household items and trash on the sidewalk. “Properties are so disposable here,” Baldwin says. For her, leaving this place and the city isn’t just about leaving an apartment—it’s a matter of finding a new home. But she’s tired of posting listings that go unresponded to and the stress of not knowing if she’ll ever fill the remaining two rooms in her apartment. “Honestly? I don’t want roommates. I’m tired of it. I was done having roommates last year.”