Learning to recognize myself in the bathroom mirror

Learning to recognize myself in the bathroom mirror 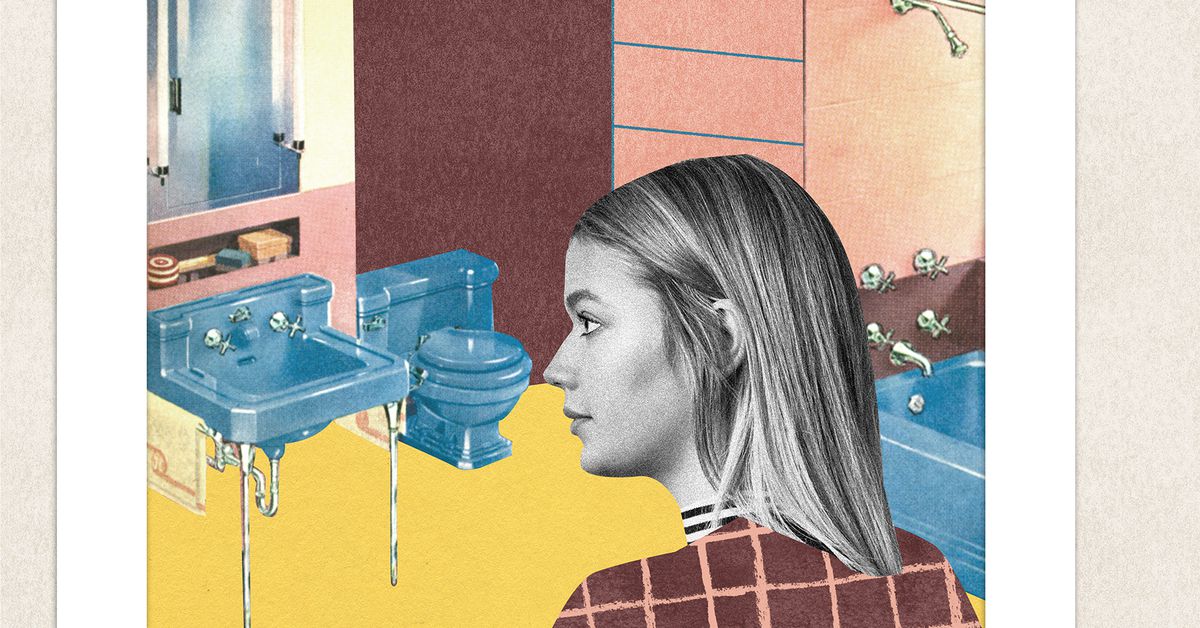 Sometime between the ages of 10 and 12, I stopped being able to recognize myself in the mirror. I would position myself in front of the glass and look for all the things that were wrong and out of place, which is to say, I would look at everything. In trying to fix what I was looking at, I inadvertently made my bathroom mirror both the site of my pain and a point of curiosity, a way to study myself and keep track of what was changing.

My house was built in the mid-’90s, during the first expansion of what would become Silicon Valley, and I shared the hallway bathroom with my sister. Behind the six-panel hollow-core door, painted white and scuffed around the handle, we each had our own sink, hers on the left and mine on the right. The drawers in the wooden cabinets were stained from tubes and bottles of various toiletries, and the handles came unscrewed every so often. My dad installed a water filter in the bathroom when I was about 9 so that my sister and I wouldn’t have to go downstairs in the middle of the night if we were thirsty.

While I was privileged to have a bathroom—with filtered water, no less—shared with just one other person, I grew combative with the space.

Due to my discomfort with the mirror, I taught myself how to use that bathroom as if the mirror didn’t exist. I washed my hands and brushed my teeth without meeting my eyes in the glass; I brought my laptop into the already cramped room so I could focus on the screen while I applied makeup. My biggest triumph was teaching myself to apply mascara and tweeze my eyebrows (which both involved making eye contact with myself and acknowledging my body’s physicality) without letting myself think about the fact that I was doing so to my body.

The best way I can describe dysmorphia is to imagine that every time you look in the mirror you see someone else’s face. The reflective image doesn’t present what you think you’re going to see, and the only thing in the world that is supposed to belong to you no longer does.

Showering, shitting, flossing, applying makeup, looking at yourself all require aloneness to varying degrees, are all actions and tasks that would make us feel on display if even one other person were to watch. It’s the looking that I feel is among the most intimate things done in the bathroom, that made my bathroom, as an adolescent, both the safest and the most dangerous place for me to be. For many reasons, I liked being alone. But I was not good to myself when I was alone. As a teen, I could spend hours in the bathroom trying to figure out how others saw me, attempting to match what felt like false compliments and placating verbal gestures with the physical components of my being.

I majored in women’s, gender, and sexuality studies in college, where I learned words like performativity and masculinities and construct, and that there exist systems like the patriarchy and white supremacy that profited off of and benefited from my dysmorphia and self-denial. I grew exhausted of staying away from reflective surfaces and embarrassed that I had such a low opinion of myself. My physical self was suffering because of my mental health, so I tried to see myself as others saw me. I taught myself to pay attention to hunger cues. I learned to cry in front of other people. I went to therapy, where I learned to see clearly.

In the bathroom, I could be myself, without trying to give others what I thought they wanted or needed from me.

After I got my undergraduate degree, I moved back home. I returned for emotional and financial reasons and stayed for different emotional and financial reasons, but I was very aware, during the shifting of my belongings from one coast to the other, of the privacies I would no longer have under my parents’ roof, in the bed where I lay as a child. For one, dating would be difficult (and bringing someone home laughable), and two, my aging out of one kind of parent-offspring relationship did not mean that the parameters no longer existed. The bathroom remained the one place where I knew no one would try to enter.

Back home as an adult, healthy but not healed, I was ready to look in the mirror. I no longer needed to detach in order to do so. I started to take my time with the activities that incited stress and self-loathing as an adolescent, and the loud, invisible voices that used to come knocking, anxious and critical, didn’t. Brushing, flossing, hair maintenance, and skin care all took time, alone time.

I don’t know if it was the mirror or myself that I misunderstood when I was younger—potentially, it was both. The mirror I thought was evil because it showed me what I didn’t want to see, and myself I thought evil because it was the thing I couldn’t look at. As I grew older I lost track of who or what it was I needed to be angry at, but I knew it wasn’t myself. Scrutinizing my reflection, I realize, was never more than a hurried, messy attempt to see myself, something that, thanks to age, time, and the safety of the home I grew up in, I no longer need.

And so the smallest room in our house soon became my favorite, not because of any physical totem it offered, but rather because it wasn’t like any other place in the house. The house belongs to my parents, and so the relief from my own anxiety isn’t born out of knowing that the bathroom is mine, but out of knowing that while in the bathroom, I am mine.

Ray is a writer and poet based in the San Francisco Bay Area. Find her retweets @raylevyuyeda.