Life in Seattle’s Autonomous Zone, According to the People Who Live There

Life in Seattle’s Autonomous Zone, According to the People Who Live There 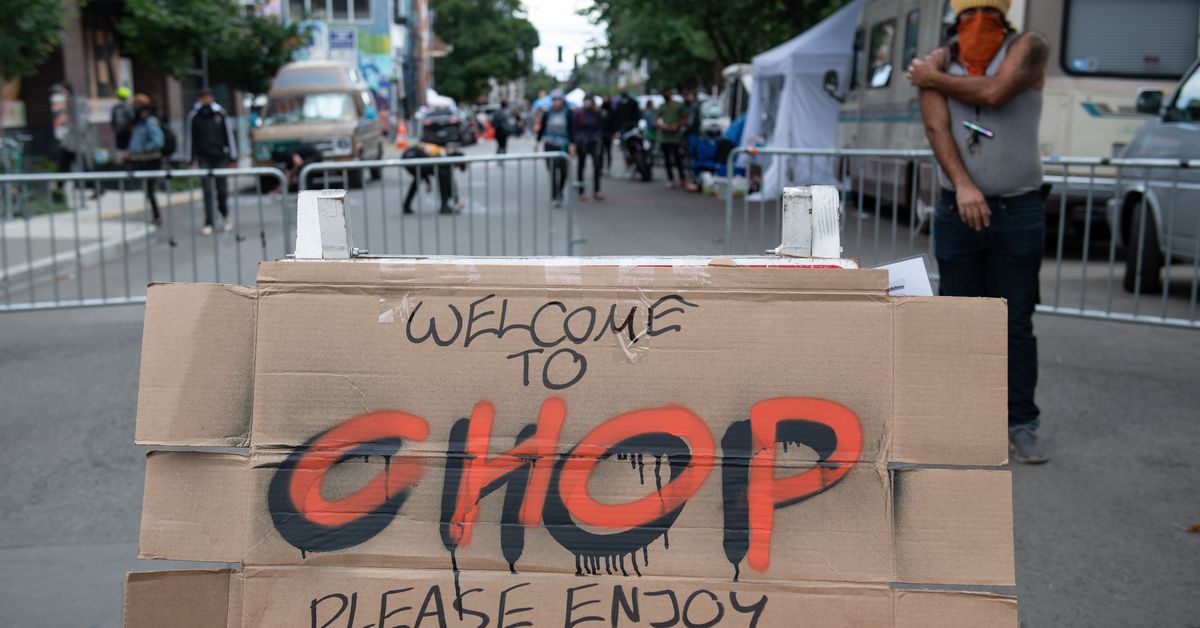 When Seattle declared its stay-at-home order in March, the usually bustling Capitol Hill neighborhood turned into a pretty eerie place. Businesses started boarding up. Artists followed suit and painted the plywood-covered windows with murals to remind passersby that the coronavirus isn’t permanent, to wear a mask, to think about the community — that things will slowly but surely return to a new normal.

Historically home to artists, activists, and the LGBTQ+ community, Capitol Hill is a hip neighborhood. “It’s one of the traditional party centers of Seattle,” says Sophia Lee, a Capitol Hill resident and a transgender woman who found solace and community in the neighborhood, which she moved to over six years ago. It’s also quickly gentrifying: Homeless people live on the doorsteps of apartment complexes that house tech workers, where rent can climb over $2,000 a month for a one-bedroom apartment.

However, the neighborhood’s community roots might have helped it find its new role. In recent weeks, Capitol Hill has sputtered back to life by taking a central role in the ongoing protest movement. What’s sprung up in the neighborhood is a radical experiment: It’s a place where people self-govern without leaders or law enforcement. While some residents appreciate the social movement, others fear that the original intent of the space — as a gathering place that amplifies the message of the Black Lives Matter movement — has been diluted because of what has become a tourist attraction.

This movement wouldn’t have existed without the deaths of Black people at the hands of law enforcement and days of relentless community protest. After the recent killings of George Floyd, Breonna Taylor, and Ahmaud Arbery, people in Seattle took to the streets in spite of the stay-at-home order. For about a week, the protesters congregated at the East Precinct located in the heart of Capitol Hill. What were intended to be largely peaceful protests turned violent, with law enforcement tossing canisters of tear gas and deploying flashbangs and pepper spray.

On one of the first days of the protest at the East Precinct, Lee was caught in the crossfires of the tear gas. “It’s like breathing in a hot pepper,” she says. With the sting of the gas piercing the back of her throat, she ran back to her home a block south of the precinct. Others were dispersing as well. When she arrived at her apartment, people were assembled outside her door, coughing. After a few hours, the gas had dissipated. “I was able to sleep okay that night, but there was the constant sound of the helicopter outside,” she says.

The atmosphere in the neighborhood was tense, especially for residents. Ruben (who did not want his last name used for privacy reasons), who lives across the street from the East Precinct, had to show his ID and key fob to law enforcement and the National Guard, which barricaded the streets, to enter his building.

Most of Seattle and the rest of the nation now refer to this neighborhood — a series of six blocks or so — as the Capitol Hill Occupied Protest zone, or CHOP for short. (It was initially called CHAZ — the Capitol Hill Autonomous Zone — but the name has since been revised to reflect the goal of the original Black Lives Matter protest.)

At first, protesters barricaded a few blocks surrounding the East Precinct and decided that it would be for the people. Signs at the barricades say “YOU ARE NOW ENTERING FREE CAP HILL,” where you don’t have to pay for anything — No Cop Co-op, for instance, has free snacks. “Help yourself,” a sign reads. “This is by you, for you.” Inside the CHOP, someone spray-painted over the word “POLICE” at the precinct and wrote “PEOPLE” in its place, such that it says “SEATTLE PEOPLE DEPARTMENT, EAST PRECINCT.” A banner next to it reads “THIS SPACE IS NOW PROPERTY OF THE SEATTLE PEOPLE.” Artists made a memorial for Black lives lost one block west from the precinct. Over the course of a few days, artists had painted “BLACK LIVES MATTER,” running west to east, along Pine Street. Others with a green thumb have developed a garden at the nearby park, which is now surrounded by tents where demonstrators are staying.

Meanwhile, residents within and nearby the CHOP are rethinking their relationship with their neighborhood. Lee has started changing the landmarks that she associates with where she lives. It used to be that, when she meets up with friends, “I make this mental judgment if they would know Pony” — a gay bar — “or the Ferrari dealership better. But now, I definitely do tell people, ‘I live half a block south of the CHAZ or the CHOP.’”

Others who live in or near the CHOP have mixed feelings about it. It’s not necessarily noisier than life before the shutdown, but Akin (who also did not want his last name used), who lives on the border of the zone, felt the need to leave his home the first Sunday of CHOP, overwhelmed by the number of people nearby. “It just feels like I’m next to the Eiffel Tower,” he says.

Tensions have escalated since the inception of CHOP. Late on June 14, someone broke into an auto shop in Capitol Hill. This past weekend, there were two shootings in the CHOP, one of which ended up killing a man. Police say they tried to respond but were thwarted by the protesters who didn’t want them there.

Other residents have begun to feel restless. One woman who lives next to CHOP posted on Nextdoor that she was looking for an alternate place to live. “I am a liberal and supporter of #blm,” she wrote. “I am however being held hostage in my place by the Occupied protest. I can’t get to and from my apartment safely. I have been verbally harassed and physically threatened by occupants. (I am choosing to differentiate them from the #blm protestors.)”

Finally, the inevitable happened: On June 22 — two weeks after the grand experiment began — Seattle mayor Jenny Durkan announced that the Seattle Police Department will be returning to the precinct but did not specify when.

In some ways, CHOP is a double-edged sword. Even though it’s been a source of anxiety for residents, it’s also been a welcoming gathering space that centers Black people.

Over the past few days, Ruben, who lives in the center of the CHOP, has witnessed many of its changes. During the first weekend, Ruben saw someone who was dressed like Jesus Christ escort an “aggressive street preacher” off the center stage. The day after, he watched hundreds of people gathered around the same stage, which featured indigenous people singing songs and dancing.

“That’s my life in 2020 now,” Ruben says. “Black folks died for this to exist. But honestly, I’m just going to roll with it, because I could listen to Black women speak their truths from outside my window every single damn day.”