Slow streets are the path to a better city

Slow streets are the path to a better city 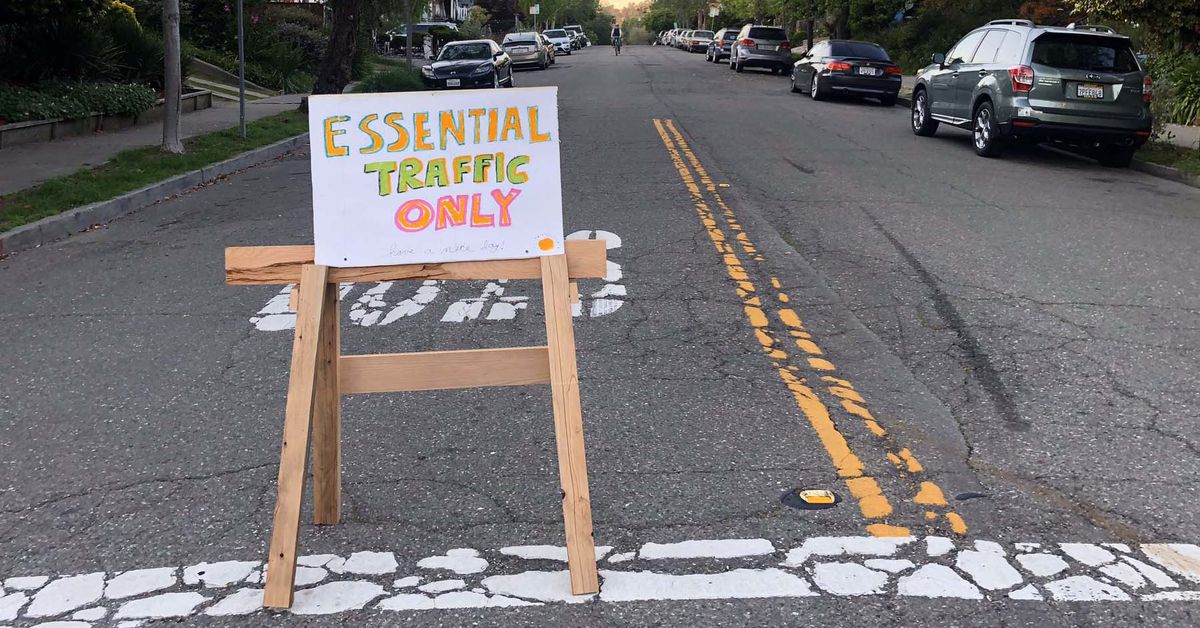 The first time you watch your kid pedal away from you on two wheels, your hand free from her seat, her wobble small and her confidence grand, is one of those high moments that make all the low moments of parenting feel small by comparison. My 6-year-old daughter learned to ride her bike a few weeks ago, cruising straight down the middle of our busy urban street.

She was able to do that because we live on one of the blocks in Oakland that has been newly designated a “slow street.” Since April 11, the city has been rolling out street closures to cars on 74 miles (nearly 10 percent) of Oakland’s streets. The idea is to reclaim part of our public space, so that Oaklanders, who are otherwise legally stuck inside, can walk, run, rollerskate, bike, or do whatever other movement boosts their mood and helps them stay healthy with more adequate distance than sidewalks afford.

“Slow streets,” overnight, transformed our family life and the lives of our neighbors. We had struggled to find a place to teach our daughter to ride her bike up until this point. It always seemed like such a production. Easier to just scoot along the sidewalk and put it off. But the minute the streets opened up, we got our helmets on and headed out. About an hour later, we had a bike rider on our hands. I’ve heard similar stories from so many parents across Oakland. The only thing that may be as reliable as toilet paper selling out during this strange era is kids learning to ride bikes.

We’ve run into—albeit with ample social distance—countless neighbors and school friends that we hadn’t seen in five weeks while taking our daily rides up and down our street. The parents talk through makeshift masks about which wave we’re riding that day (grief, anger, delight, hope); it’s saving our mental health, but also strengthening our civic bonds.

We follow up with a kale and Brussels drop-off from the farmers market the next day because we know that someone is short on greens, or we do a ride-by birthday cheer with banners and kazoos to brighten a quarantine birthday. That kind of cohesion is critical to civic life and hard to come by when we’re all obligated to stay away from one another.

It’s not all kumbaya on our street-cum-public square. Cars are still coming through the “slow streets” from time to time (delivery trucks, people who live on the block, and some motorists who haven’t gotten the memo yet), and this makes for dangerous confusion. A neighbor saw some little kids almost get hit. We’re liberated by the policy, but not free from worry. And, of course, those who live on the block need to get to their homes and have packages delivered, so there will inevitably be some traffic regardless. Of course it will take time for people to get used to such a big shift in how we use our public space.

But if we taste this more walkable, more bikeable city now, will we advocate for it later?

I asked my friend Natalie Foster, who spent last summer in Berlin and is now back in Oakland (where I’ve run into her many times on our street), what she thinks: “We wanted to experience life in a city that prioritizes mass transit, biking, artists, affordable housing—the good things about city life,” she says about her time in Berlin. “In the aftermath of the Cold War, Berlin had to rebuild and did so with a different set of priorities. We will have the same opportunity someday, and I, for one, hope we prioritize economic resilience and livable cities.”

Natalie has just purchased an electric cargo bike from our local bike shop so she can ride the streets with both kids. She feels like it’s opening up parts of the city to them and she doesn’t want to lose that when sheltering in place is over.

Natalie also drew an important parallel. She is the co-founder of the Economic Security Project, which is exploring guaranteed income as a solution to many of our country’s most pressing woes. They have seen a huge expansion of public will over the last few weeks because of COVID-19 and the ways in which it put our already existing economic crisis in such stark relief. “We’re starting to see what we were once told was impossible happening,” she says.

Another friend, Liz Ogbu, thinks the same could happen in other areas of our common life, but she raises an important point. Liz, an architect by training, has done some of the most dynamic, deep work in the country (and beyond) about how to meaningfully engage communities in the design of their own spaces. When I asked her if she had hope that the “slow streets” would lead to longer-term changes in our cities, she wrote: “The urgency of now has allowed the quick implementation of plans, like slow streets, that had previously been deemed too big, too hard, or too complicated to ever see the light of day. And there’s a power that comes from knowing that yes, it is actually possible to do all of these things.

“But just as we’ve observed that the pandemic has magnified injustices that existed prior to it,” she went on, “it’s worth noting that in some cities, the implementation of these ideas is sometimes flowing along the same lines of inequity as many pre-corona planning and policy efforts.”

The City of Oakland claims that the slow streets policy has an equity lens: “Oaklanders have inequitable access to parks and open space and the lack of safe space to be active further exacerbates existing equity issues.”

Yet we can’t just expect “slow streets” to bring neighbors together when our neighborhoods are such deeply contested spaces—especially in rapidly gentrifying and unaffordable Oakland. Our long-term expectations, one hopes, won’t just be transformed in terms of what we each want for our blocks and our families, but all blocks and all families in our cities. It would be a tragedy, on top of so many tragedies we’re experiencing right now, if a “slow street” became one more accoutrement that white and elite families knew how to acquire to heighten their property values in Oakland. We can’t let this happen.

Last Sunday, I wandered out and found a mom across the street DJing on her front porch. When her kid wandered out, she pulled him into her arms. Eventually, he fell asleep in the crook of her neck. She went on spinning. My kids and I and four others went on dancing. Six feet apart, of course. For now, I’ll continue to enjoy the strange revelry and movement this moment is offering us, and keep my eye on the collective, citywide prize down the line.

Courtney E. Martin is a writer living in Oakland, hard at work in her new office, her car, on a book about white parents and school integration. You can subscribe to her weekly newsletter here.