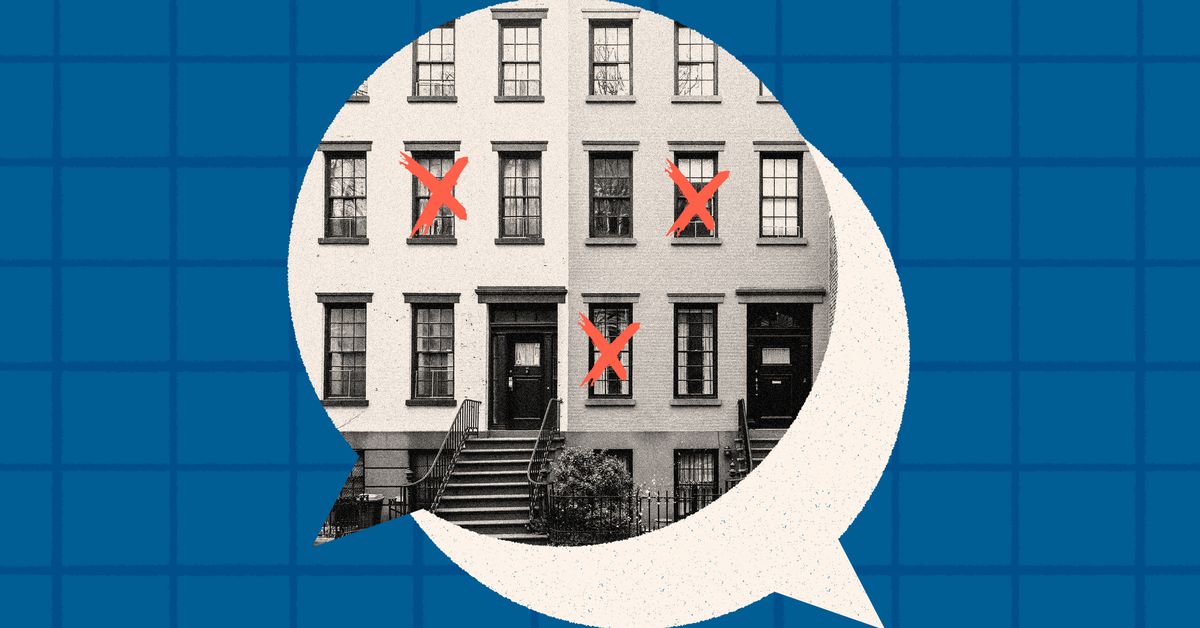 In August 2018, I moved into a second-floor apartment in a brownstone in Park Slope. My roommate, Lucy, moved in later that month. By the fall, thanks to a series of building problems, I’d become unusually close with our neighbor, Cat Beurnier, who lived downstairs with her two kids. We spoke about how living in a disaster building cemented our friendship.

Jessica Gross: Let’s start in fall 2018 when, a couple months after I moved in, all the drama started with our building. We’d spoken before then, when we passed each other in the hallway, but that’s when we became close.

Cat Beurnier: Right. It was the end of October, I think?

Jessica: Yes, and “John the Plumber,” as Joe [our landlord] kept referring to him, failed to come turn on the heat, resulting in this —

Cat: Disaster. If memory serves, I called him and asked if he would come turn the heat on [because the boiler is in the basement, which is part of Cat’s apartment], and he told me I should do it myself. I was like, “I’m kind of nervous about doing that.” He said, “Well, you have a carbon-monoxide detector, don’t you? If there’s a problem, then the carbon-monoxide detector will go off.” I was really nervous, but I did turn it on. A couple days later, the detector went off in the middle of the night and there was a strong smell of gas, and I tried calling John the Plumber —

Jessica: Who had taken the key and gone away to the Caribbean on vacation.

Cat: My friend told me to call ConEd, and the next thing I knew, the freaking fire truck was in front of the building. The fire department called National Grid, and they came within an hour and found a gas leak and shut off the gas. I thought it was going to be a few hours, for some reason. I had no idea that it was going to be months.

Jessica: So we started having intense planning meetings about how we should handle this situation, whether we should call 311 —

Cat: It was so freaking cold, remember?

Jessica: It was so cold. It was a freezing November.

Cat: I feel like a week and a half went by, and Joe still hadn’t done anything.

Jessica: Yeah. You made an Excel spreadsheet outlining the timeline of events, which you shared with me and Lucy, in case we needed to take legal action.

November 3: We ask for heaters and hot plates and for Joe to appoint someone as project manager. He says he will get back to us after the weekend.

November 6: Contractor comes to inspect asbestos in boiler room. He enters Apt 1 without any notice or preapproval from Cat. He uses a set of keys from [the school custodian across the street, who does minimal building-management duties on the side]. He suggests Cat buy a plastic tarp from Home Depot to cover belongings once work commences, as it will be messy. He indicates old boiler will be replaced with a new one. He says he is doing everything possible to get this resolved. He says that, rather than buy us heaters, etc., he will offer us a reduction on the rent. He says we should continue paying rent as usual, and he will write us a check. He asks us to determine a number, and we can negotiate. We ask to please be alerted of repairmen’s comings and goings to the building.

November 7: Engineers inspect the property. They indicate work can be completed by end of month, Xmas at latest. They leave the back door to garden in Apt 1 unlocked and ajar. They say the heat will be the first priority. Getting dryers and gas to ovens will come later. Jess asks for 100 percent reduction in rent until this can be resolved. Joe says he will think about it.

Cat: He just kept saying, “I’m calling the people. They’re coming by.” But nothing was happening. There was no work being done.

Jessica: Joe wanted to pay us to move out, which felt unimaginable to you because you have a family, and also to me because I had literally just moved two months prior. So, basically, we were trying to somehow prompt empathy from Joe to get him to take some care of us. He made us buy all the stuff we needed to live, like space heaters, rather than getting them for us. “Just tell me how much, and I’ll reimburse you later.”

Cat: I feel like we got maybe a half a month free or something. And there was no project or building manager.

Jessica: When did the gas come back on? Do you remember?

Cat: They turned it back on sometime between Christmas and New Year’s, I think.

Jessica: We staged various meetings to strategize and call Joe all together while recording him on speakerphone in case we needed to use the recordings later. We drafted a detailed, multipage letter of demands that we didn’t send in the end. By the end of that whole experience, we were —

Cat: We got to know each other.

Jessica: That nightmare catalyzed our friendship. And there have been other spikes of drama with the building that have brought us closer, too. Even as the gas debacle was unfolding, Joe was trying to sell the building. And then he hired a contractor who dropped a metal pole through several floors of the building, and, despite this, he continued to hire him.

Cat: I was actually cleaning my bathroom floor over the weekend, and I came across the dent in the tiles where that thing hit.

Jessica: Joe’s neglect has been fruitful for our friendship. After that, COVID happened. I was just remembering our good-bye in late March. I was going to mail your rent check with mine, so you put your check at the top of the stairs. I crept toward it as you crept away; I picked it up; then we stood a number of stairs apart and said good-bye.

Cat: That was so weird.

Jessica: So weird. What has it been like there since I left for West Texas?

Cat: Someone ordered a pizza at three the other day, and they rang my bell and I was like, “If they don’t take it, I will.” I’ve been out in my garden a few times, and there’s someone two houses down that I hear playing a lot of 1960s rock in the afternoon. I don’t know. It’s a weird-feeling vibe. The Y is closed, the library is closed, the school is closed. Hopefully one day we can all do our things again.

Jessica: Yeah, and have a really good garden party.

Cat: Exactly. We’ll have a barbecue in the backyard.