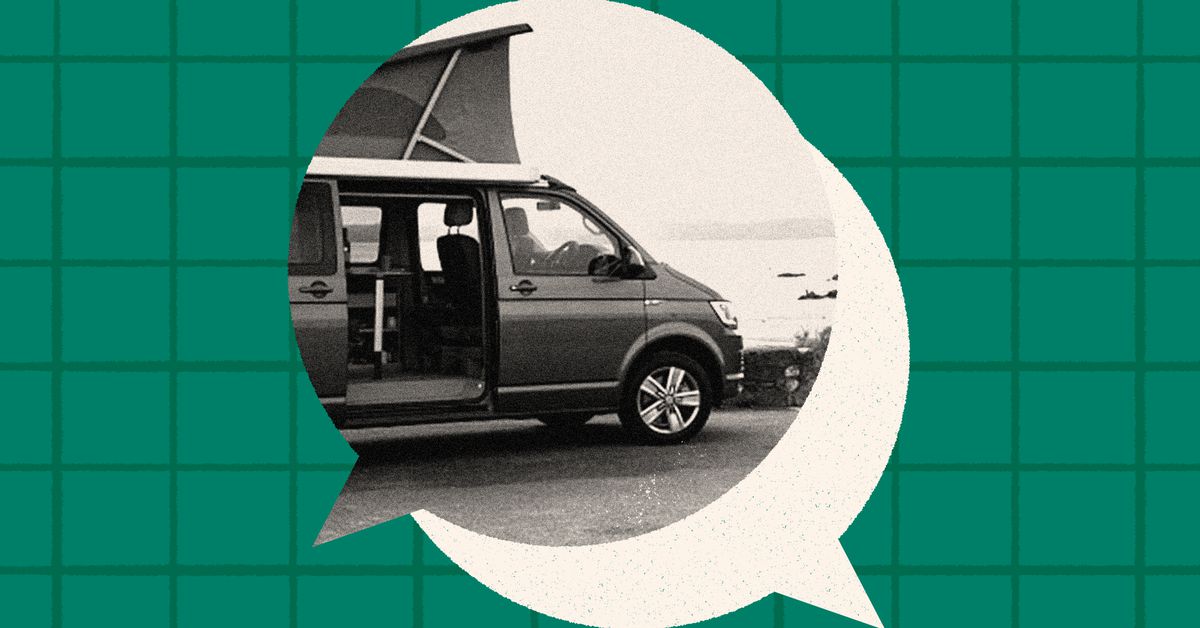 After ditching a life in corporate accounting in 2017, Amber Baldwin hit the road—first in a Winnebago recreational vehicle, and then, starting in 2018, a Hymer Aktiv camper van. In three years, she has crisscrossed the U.S., completing 30 of National Geographic’s 300 scenic routes, and traveled to parts of Canada and Mexico.

Baldwin usually travels alone, chronicling her trips, and posting interviews of other RV and van owners, on her YouTube channel. Traveling solo is typical for many people who trade in their homes or apartments for full-time life on the road. But last year, Baldwin met Mark and Shea, digital nomads who have been living in a custom van for about five years (and who declined to give their last names for privacy reasons), at an RV event in San Felipe, Mexico. They decided to head north in tandem, to Alaska, for the summer—where Baldwin discovered the benefits of having friends on the road.

Close to Homer, the second alternator in her van, which she uses to charge the batteries, caught fire. Mark and Shea saw the flames from their van in the lead and leapt to action.

“Mark got out and put it out. I gave him the fire extinguisher,” Baldwin recalls. “It was pretty traumatic, but they were amazing. They were completely there for me during the entire time. Talk about a good neighbor.”

The trio recently regrouped near Flagstaff, Arizona, after leaving Baja California in early March. Curbed caught up with them to talk about van life as traveling neighbors and how their relationship has changed since the coronavirus swept across the U.S.

Amber Baldwin: It’s very rare actually for me to be traveling with people. I think for me, I felt this like-mindedness with Mark and Shea, and we had similarities and things that we liked as far as “When do we wake up and start going for the day?” or the fact that we give each other space. Because this is our home. We just don’t go knock on people’s doors all the time and expect that they’re going to come out and socialize.

Mark: When you meet somebody in this life and you decide to go somewhere together, it’s almost like asking them to move in. You don’t really know if you’re going to regret it 24 hours later.

Shea: While we were traveling together, there in Alaska, for example, we had some adventures. Amber and I and our two dogs—who also love each other, which is part of how we all get along as neighbors—took a boat ride for the day and really enjoyed that. Then we’d make plans to go out for dinner or go out for drinks or go to the coffee shop in the morning.

Shea: In the context of quarantine, our plans have been, “Let’s meet out in our camp chairs at a safe distance and have our coffee together in the morning.”

Amber: I was actually in Baja [California], Mexico, at the time when we started hearing about everything. But I had already come back to the States when President Trump actually did his first address to the nation where I think everybody realized just how serious it was starting to become. And at that point, I was down in the Palm Desert, California, area. I think you guys were still in Baja?

Mark: Sonora, right there at the very top of the Sea of Cortez.

Shea: Yeah. There were things happening in the United States more quickly than in Mexico. We probably bought ourselves a week of non-social distancing by being down in Sonora. But one day we were headed for our morning beach walk and the guy who owns the RV park came chasing after us.

Mark: Really running after us.

Amber: We can still travel. For us, it’s different, the stay-at-home order. This is our home.

Mark: Something to know about [RV] full-timers is we have to obey the weather in general. It’s just too miserable to camp when it’s hot or when it’s cold. Even in pandemic times, we would only move when the weather forces us out or when the local laws tell us we need to leave. I think with smaller, more nimble vehicles, we’re able to go to a lot more different places anyway. For that reason, I feel like it’s a more enjoyable way to stay socially distanced to just move whenever we need to move as conditions change on the ground. It’s not hard for us to do it.

Amber: But we don’t go out and do the touristy things or the things that we used to do when we would travel.

Shea: There are differences between how we travel together in non-COVID times versus COVID times. Not petting each other’s dogs, which is really sad, because we figure that there could be germ transfer on the fur. And then we’re not letting the dogs play with each other, which is a little sad for them as well. I think during normal times we’d be sharing things more freely. We’d be sharing treats more freely. Like, if I make some cocktails for us, under normal circumstances, I would totally be like, “Hey, can I make you a cocktail?” We could probably still do that, but it would just take a little bit more logistics.

Mark: The science is always evolving, so we want to play it safe.

Amber: There have been times where we said, if I’m going to the grocery store, “Hey, do you guys need anything?” Which is pretty common anyway when we go to the store. But even more so now, you do want to kind of pull those resources together so that, one, we can keep our campsite [since one person stays behind]. And, two, if I’m going to the grocery store and Mark and Shea don’t need to go, they don’t need to subject themselves to having to wear a mask or gloves or risk infection or whatever, and then I can just grab everything, and vice versa. So we kind of work it out that way. And then we immediately come back to our van.

Shea: We also share a lot of research. When we moved to Flagstaff, that’s a huge process because each of us is researching online “Where is a good site?” Because we have criteria: We need solar [for powering batteries and cell-phone chargers] and we need good reception—and we have different carriers, actually. Some of that research was done physically. Amber scouted a certain place in her vehicle, and then she was doing speed tests and reporting to us.

Amber: Usually I travel solo, but having Mark and Shea with me felt very safe and comforting, especially when all of this was going on. We can pull resources and really get our heads wrapped around everything. But this isn’t new: The RV community has always been very helpful with each other — I would say much more so than I’ve ever experienced in a normal sticks-and-bricks-house community. We’re just there for each other.