The appeal of the TikTok everyhouse

The appeal of the TikTok everyhouse 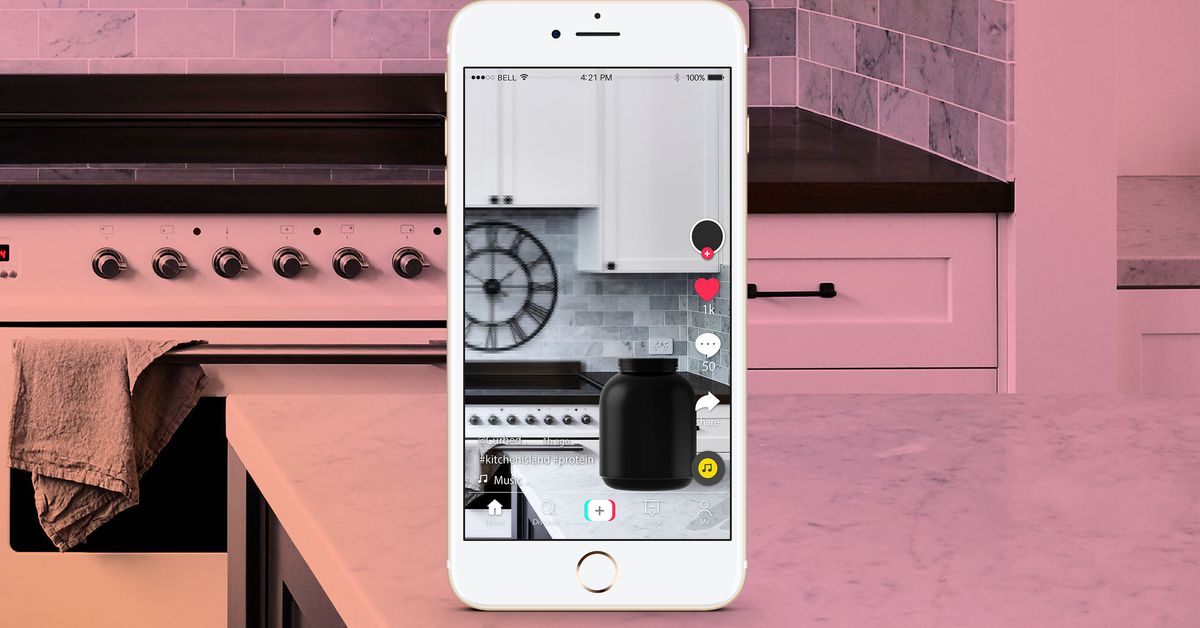 There’s something about the TikTok house. You see it in the background of a video about something else, usually, but for many people who watch TikToks, the background is kind of the point. You can tell by the comments, which point out the bottle of Malibu rum on the counter, a dirty floor, someone’s sister standing awkwardly in the corner.

Like a lot of people, I’ve been getting into TikTok lately (in fact, there’s an entire TikTok subgenre about millennials like myself stumbling onto the app). At first, I was immune to much of the content, which felt like a dull blur of makeup tutorials and unappetizing recipes for mug cake. Slowly, though, it grew on me—or maybe its algorithm grew to know me.

TikTok is about as addictive as social media apps come, serving a stream of content that feels at once irrelevant to my life and totally absorbing: a woman roller skating blissfully to a J.Lo song, for instance, or someone at Five Guys cramming potatoes into the fry machine. Because TikTok’s “For You” page fills up automatically, you don’t have to know anyone on the app to set it into motion, freeing you from the nagging obligations inherent to other social media. It offers the joy and surprise of homemade content without the bummer qualities of, well, people you know.

A lot of TikToks take place at home, especially these days. Some of these settings resemble what Paul Ford described in 2014 as the American room—the “undecorated slab of beige” seen across YouTube. Other houses on TikTok are totally extravagant, with turrets, indoor basketball courts, and eagle sculptures that are also clocks; or eclectic, carved out of former schools or churches. Decor TikToks are a genre unto themselves, dripping with houseplants and sunlit Urban Outfitters wicker.

What I love most of all, though, are the regular TikTok houses, with rooms that follow rules put forth by American building practices, big-box retailers, and the app’s moderators, but that still manage to feel lived in, personal.

These are homes in the beige area between the extremes. The living room has a 50-inch TV and a vast sectional sofa. The floor is hardwood-ish, neutral carpeted, or maybe sporting a quatrefoil rug. There’s a giant clock on the wall—often this one, the first thing that comes up when you search “clock” on Home Depot’s website. Christmas lights are strung half-heartedly around bedroom doorways, cords tangle along the baseboards, and there are so many pools. (According to the 2011 American Housing Survey, just 15.7 percent of residences had a pool; pool owners appear to be overrepresented on TikTok).

But I’m really watching for the kitchen. It’s usually on the large end, with cabinets winding endlessly around the room. There are wooden signs that say “live laugh love” or “eat” or “kitchen” in cursive letters; maximalist iterations of the TikTok kitchen have 10 or 15 of these signs. There’s a five-pound canister of whey protein on top of the stainless steel fridge, and maybe a KitchenAid stand mixer taking up 1/50th of the granite island.

The room is also the backdrop for the most gratifying content on the app. In the kitchen, family members or roommates intersect, searching for food (or whey), loitering around the island, bothering each other.

Take this entry by @hjoelled, with 7.2 million views: In a familiar-looking kitchen, with a six-panel door and an island, a woman chants and claps: “Everyone needs to release their steam, everyone needs to scream. You go first!” The camera pans to a girl standing by the microwave, who immediately lets out a primal yell. Then there’s @stegnerr’s post (524,000 views), featuring a group of roommates shattering the oven door as a squirrel rat thing runs through the room. Or this one from @0401swizz (10.2 million views): Somebody’s dad walks into the kitchen while whoever’s filming wheezes with laughter, and—well, I won’t ruin the joke.

Even when there isn’t an explicit punchline to the scene, we’re looking in on some inside joke—especially with TikToks like these, which have what commenters describe as “Vine energy,” a reference to the now-defunct video app. It’s more satisfying when there’s an explanation missing, when the joke’s left unfinished, when it’s not for you: Why are the people in kitchen 1 screaming? Who is that playing the prank in kitchen 3?

The confusion is all part of the fun, just like the sense of voyeurism that energizes the app: These are other people’s homes we’re peering into—we’re barely allowed to be there, but we have a lot of questions: “Bruh how y’all have SO MANY cabinets,” for instance.

The TikTok house is not accidental, even though the algorithm seems to spit out random content to its “For You” section. In March, the Intercept obtained internal documents from the company, translated from Mandarin into English for its American team, that instructed moderators to hide videos with environments that were “shabby and dilapidated,” with “crack[s] in the wall” or “old and disreputable decorations.” (The documents also trained moderators to censor “ugly” and disabled people and some political speech.) And because the content is moderated, it’s doubly predetermined: by the people who decide what surfaces, seemingly at random, onto the “For You” page, but also by American building practices and Home Depot corporate buyers.

There are unspoken patterns undergirding the homes and apartments on our apps. “American rooms are a kind of product, built as quickly and cheaply as possible to a standardized specification,” Ford writes in “The American Room.” This means that much of what we see in these amateur videos is familiar, he says, like Benjamin Moore’s best-selling shades of white paint, houses built using blueprints from AutoCAD architectural design software, ceilings at 8 feet. The algorithms on TikTok match the ordering of items on big-box store websites, so that the app sometimes feels like a showroom. The clocks look familiar, and the doors are probably from Lowe’s, and the speckles in the granite look like the speckles in your granite.

There’s an eclectic strain in these homes, though, that brings them to life. A “generational witch” sees an entity in her shower. Two neighbors modify their backyard fence so they can fold it down and have a beer. A house is populated with the narrator’s mother’s collection of giant mascots and Rubiks cubes. More than redecorating videos and sleek home tours, I love TikToks where someone’s regular home is a little surreal.

Like a lot of the world, I’ve been mostly inside for the past two months. Why do I want to get more indoors, into these other houses? I just want to know what people are up to in there, to see all the stuff they surround themselves with—stuff that looks uncannily like mine. As one commenter says: “as a kid I always wondered what people were doing inside their homes...and now I know.” Aspiration has nothing to do with it.