Timed Ticketing Is a Clue to Reopening New York

Timed Ticketing Is a Clue to Reopening New York 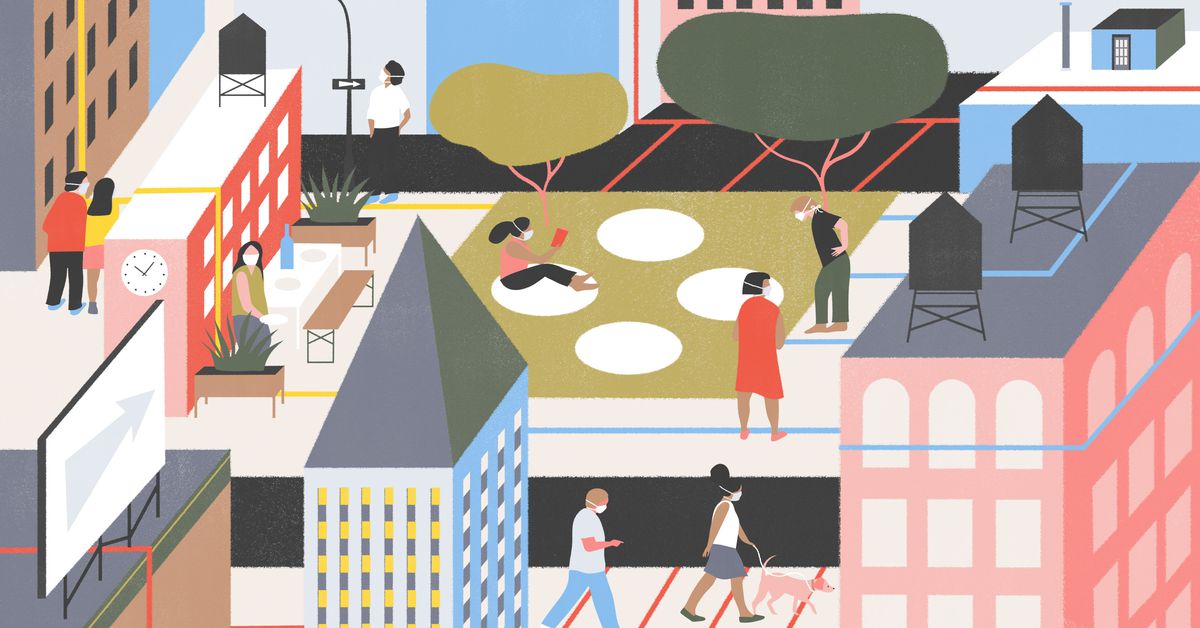 When the Vessel at Hudson Yards opened last March, among New Yorkers’ many complaints about the 150-foot-tall, Thomas Heatherwick-designed mirrored-copper sculpture was the fact that you had to sign up in advance to climb its 2,500 steps. A designer who understood New Yorkers — and not just his billionaire client — would have understood that we do not like to wait.

How quaint that attitude (my attitude) seems now, as I watch New Yorkers line up all across the city — on spray-painted and duct-taped lines, inside subway stations, and awaiting entry to public bathrooms, grocery stores, farmers markets, and museums. Signing up months in advance for a summer slot at a rural campground used to seem like a normal inconvenience; in the summer of 2020, though, we’re signing up for slots on ferries to and from Governors Island. Tomorrow, a section of the High Line will reopen on a timed entry system. It’s not difficult to imagine, as temperatures rise and crowds form, that we may soon be reserving six-foot circles in the park, spots in parking lots near public beaches, or 20-minute time slots at the local splash pad or pool. The fall will bring still more time slots — chosen, not by us, but by teachers and employers.

One of the most potent tools for reopening leaves no visible trace: We can make more space in dense cities by taping off chunks of time, not the floors of our buildings.

When New York City schoolchildren return in the fall, most will be on a hybrid schedule, spending part of each week in the classroom and part online. (There will also be an all-digital option.) Principals looking to maximize space in school buildings will likely divide children into “cohorts,” with cafeterias and gym spaces serving as classrooms. Classrooms that once held 35 kids will now hold 12. Looking at photographs of classrooms in countries where kids have already returned to school feels like time traveling: rows of desks have replaced the small tables, colorful rugs, and break-out spaces typical of contemporary classroom design. Some schools are even considering using rubber or Tyvek wristbands, like the kind you might find at amusement parks, to easily identify which students are MWF and which are TTh.

The MTA’s 13-point Action Plan for A Safe Return includes “Stagger Business Hours” to try to spread commuters more evenly throughout the day. The agency’s own “Return to Work Employee Guide” includes such staggered schedules, as well as “A” and “B” groups of employees that may be assigned to different days of the week, according to the City. In truth, the concept of morning and evening “rush hour” has long been outdated, since many of the city’s million-plus essential workers in healthcare, delivery, and transit — 25 percent of the work force — don’t work 9 to 5.

We can stagger usage of our streets, too. In 2018, when the L train shutdown loomed, the MTA and DOT proposed a bus-only lane across the Williamsburg Bridge. Every competition proposing redesigns for the future of the Brooklyn Bridge suggests opening one of the current car spans to bikes. Recent Black Lives Matter protests organized by Street Riders NYC have demonstrated what that looks like on a temporary basis. But what about different arrangements at different times of day? Time slots for dedicated bus and bike lanes at certain times of day or certain days of the week? Such an arrangement is not without historical precedent: In the early part of the 20th century, streets were closed after school every day of the week except Sunday so that children could play safely for a few hours before the streets opened up again for the evening rush.

Objections to more complex scheduling of street space could be met with four words: alternate side parking regulations. If the 45 percent of New York City households that own a car can figure out where to move their vehicle one morning a week for two hours, then surely we could also learn which days and times the streets are reserved for buses and bicycles.

The most powerful part of the office distancing video created by commercial real estate company Cushman & Wakefield, is the new choreography of waiting: waiting for your assigned day at the office, waiting for a less-crowded train, waiting for your turn to rise from the conference room table. Software once used to schedule meeting rooms could be used to schedule outdoor meetings — a trip around the block, a conference across a park bench — along the lines of that Silicon Valley staple, the “walking meeting.”

Kastle Systems, a security firm cited in a New York Times round-up on “virus-proofing the new office” has already leapt ahead to optimizing your timed work ticket: an app to automatically open doors, a “fast lane” for temperature checks if you’ve filled out your paperwork. The concept, like the graphics, is more than slightly infantilizing — reminiscent of a second-grade teacher saying, “Now it is the blue table’s turn.”

Waiting can also be wielded as a weapon. In Georgia last month, Black voters waited in lines so long some of them even brought their own chairs, while majority-white polling places had few lines. The curfews announced by the mayors of numerous American cities following the first days of Black Lives Matter protests — themselves a response to being told to wait too long for an end to police brutality and systemic racism in housing, education, transportation, and city planning — were also, in a way, instituted to enforce waiting. Allowing governmental authorities to, essentially, institute timed ticketing on protests, puts an unjust limitation on civic expression, which is protected by the Constitution.

Time feels different now in so many ways. The time many Americans have spent away from schools, offices, and stores has already transformed our relationships to those places, and to the people we encountered there. Social distance has sharpened the desire for some in-person interactions— the water cooler chat, the book club discussion, the café with the good coffee — and suppressed the tolerance for others — the noisy classroom, the unnecessary meeting, the frustration of shopping for new clothes in an overcrowded store. The increase in quiet time — whether it is spent with children, or simply exploring the neighborhood, walking the sidewalks, and visiting parks — has put new strains on families, led to increased awareness of inequities, and also (in the best of cases) fostered new appreciation for what was already there.

Grieving a city is like grieving a person. You shouldn’t make too many decisions at once; don’t do anything you can’t undo. It’s important to realize that next week, next month, or next year, you may feel differently than you do right now. The simple questions like, “Will people ever take an elevator again?” always remind me of the long no-growth period in New York after 9/11, when the question was: “Will people ever work in tall buildings again?” Initially, it seemed impossible. But time did its slow work and, eventually, the answer changed.