What it’s like to organize renters during a pandemic

What it’s like to organize renters during a pandemic 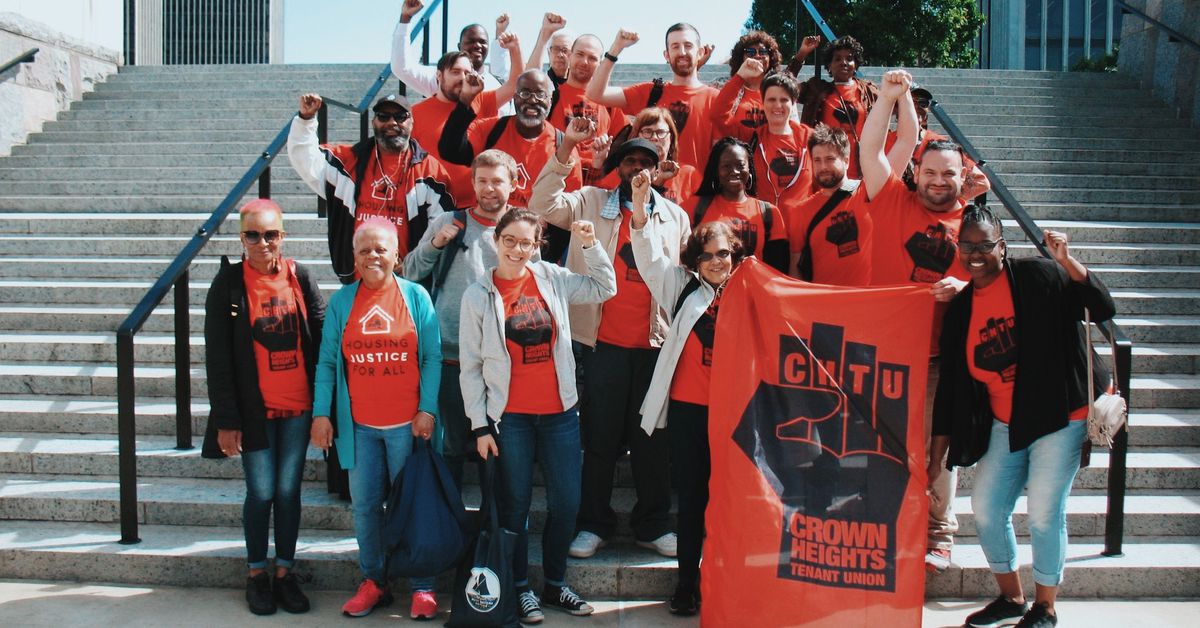 Joel Feingold is a cofounder of the Crown Heights Tenants Union (CHTU) and a member of its organizing committee. Since 2013, CHTU has been fighting displacement, gentrification, and illegal rent overcharges in the Brooklyn neighborhood.

The COVID-19 pandemic and economic crisis have intensified long-standing problems tenants in New York and across the country have experienced with their landlords. Now, many renters cannot pay due to losing their jobs. While the federal government enacted mortgage relief laws as a result of the pandemic, similar actions have not been taken to protect renters. Now, many are joining the national #CancelRent movement. On April 1, about a dozen buildings in the Crown Heights Tenants Union went on a partial or total rent strike; CHTU estimates it will have between 25 and 30 buildings participating in a full or partial rent strike on May 1.

Curbed talked to Feingold—who spoke as an individual member of CHTU and not on behalf of the whole organization—about how the tenants rights movement has been amplified by the coronavirus pandemic.

This as-told-to has been edited for length and clarity.

I first started organizing in New York City with a group called Good Old Lower East Side around the redevelopment of the Seward Park Urban Renewal Area. I was organizing with former site tenants in public housing to demand 100 percent low-income housing be rebuilt in the urban renewal area, and that former site tenants have the right to return. Around that time I moved to Crown Heights and I have been here ever since.

In 2011, Occupy Wall Street happened and there was talk about local, neighborhood occupation. A group called the Crown Heights Assembly started and it eventually emerged that long-term tenants here in Crown Heights wanted to organize around evictions and on stopping the displacement of working-class black Brooklyn. People were fed up with getting evicted and communities disintegrate in the face of Wall Street-backed real estate capital.

What’s called gentrification is really just a cycle of displacement and overcharge that affects different types of tenants differently. But they are cyclically linked. The long-term tenants—Black tenants, Latino tenants, Asian tenants—are being evicted and the same landlords turn around and illegally overcharge new tenants. The destruction of a deeply rooted working class community is a very different harm than a newcomer—the new working class—getting illegally overcharged. But they are cyclically linked, and they add up to the social cleansing of neighborhoods and turning New York City into a place for the rich exclusively.

The CHTU is based on the model of long-term tenants and new tenants uniting and fighting to break this cycle of displacement and overcharge. We’re a budgetless, staffless, rank-and-file organization. So everyone who is involved in CHTU is just a tenant. We’re fellow tenants together running this thing. We have grown hugely, as have all groups who are organizing around the rent crisis during the pandemic. On April 1st, we had 12 to 13 buildings go on partial or total rent strike and I believe we’ll have 25-30 buildings on May Day going on partial or total rent strike.

Even before the crisis hit, we were noticing an uptick in turnout to our monthly general membership meetings. We’d typically have between 20 and 50 people attend. Our meetings have gone virtual because of the pandemic and we’ve been having 50-100 people on weekly calls since the beginning of the crisis.

The pandemic and the economic crisis have intensified long existing problems tenants have had. About six months ago, we started working with the tenants in a building on East 86th Street. The conditions in this building are extreme. I am talking about toxic mold on a scale that caused the city to order children not to be present in the building, where the landlord is making daily calls and knocking on the doors of tenants demanding rent, where children have been burned when the winter heat system was used during the summer. Since a new landlord took over the building, some long-term tenants who have been there for decades have seen their rent go up $700 to $800 just through rent fraud, manipulation, and intimidation.

All those issues preexisted. Now people are out of work. They are laid off, they can’t get unemployment, and people are completely at a breaking point and are refusing to pay rent. They are going on a rent strike against these conditions, and also the things that caused them.

Inquires from newly organized people are just pouring in. It’s unbelievable. It makes me think of a well-known moment in the labor history classic The Turbulent Years, which is about the Great Depression. An organizer comes into their office in the morning and gets calls that would say: “We have taken the boss hostage, we’ve locked him in the closet, and we are going on strike. What do we do next?” It’s been like that. People are contacting us saying, “We’ve formed a tenants association, we’ve written our demand letter. What’s next?”

The level of consciousness that tenants and workers have automatically come to in this crisis is incredible. People are up against the wall, they have no work, and they can’t pay rent. They’ve banded together with their neighbors during physical distancing, and figured it out. It’s just incredible.

What the CHTU has really specialized in is organizing buildings where there are some new tenants and a lot of old tenants. Those are the buildings that we’re still seeing lead the fight, along with buildings that are 100% long-term tenants. Longterm, established working class people, and certainly newcomers, have been part of this wave that has been emerging since the pandemic started.

There are CHTU members that are MTA workers and health care workers. They’re out there risking their lives and they’re pissed off and they have a sense of solidarity. They don’t want to see their fellow workers or their fellow tenants taken advantage, like in a building on Dean Street. One woman has been in the building for over 30 years and she works cleaning train cars. A newer resident is a yoga instructor and he has no income at this point. They’re fighting side by side. While she can afford to pay the rent, she’s going to go on strike on May 1 to support him. And he is going to strike on May 1 to demand that she gets the repairs that she’s needed for decades in her apartment.

The fundamental principle is solidarity: It’s not that everybody has the same demands or the same exact situation. It’s that there are common demands that can be shared that affect us all. And then we fight for one another’s particular demands.

My advice for people who can’t pay their rent this month, or next month, would be to go out and talk to your neighbors. Figure out what their demands are, what your demands are, and what you are going to be striking for—repair conditions, harassment, illegal overcharge—and to demand the cancellation of rent. Send that to your landlord, send that to your elected officials, and talk to other buildings owned by your landlords and do the same thing.

While there’s an eviction moratorium right now, the state is going to try and reopen the courts at some point. What we need to do is have such a strong movement and so many people involved that they can’t evict us all. We’ll shut down the housing courts if we haven’t won the cancellation of rent by that point. We’ve been living in a crisis forever. And now it’s time to bring the crisis to the landlords that caused it.

To step back for a little bit, I am from a small, industrial, union town in the Midwest: Janesville, Wisconsin, which was a GM town. The UAW, Local 95, left a strong impression on me as a child. I knew that because of the union’s presence and because workers fought—that was why so many of my classmates and the people I was growing up with were able to live good lives.

The roots of the tenant movement in New York City go back to the Workers Movement. If you look at the first Labor Day parade in the city, workers were carrying banners that say: “Pay no rent.” The first large-scale rent strike in 1907, which was on the Lower East Side, was organized by women and men who were garment workers who had the experience of organizing against sweatshop conditions on the job. They brought that back home to the tenements.

This fight is really about workers having control over the conditions of our own lives, wherever we are, whether we’re at home, whether we’re on the job, or whether we’re on the streets. Landlords and bosses are squeezing money out of us and it really should be the other way around. We’re the source of value in this system and democratically together we should be able to own and control in common the necessities of life.

In CHTU we talk about this a lot: The wages are too low and the rents are too high. And it’s really the same system that’s caused both of those problems.